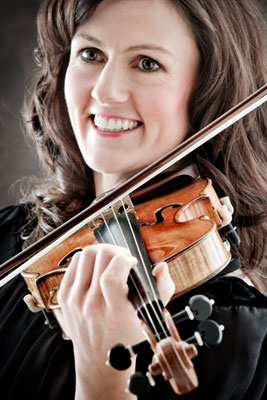 Recently appointed Concertmaster with the Melbourne Symphony Orchestra, violinist Sophie Rowell has had an extensive performing career as a soloist, chamber musician and principal orchestral violinist both in Australia and abroad.

After winning the ABC Young Performer’s Award in 2000 which resulted in solo performances with all major Australian symphony orchestras, Sophie founded the Tankstream Quartet which won string quartet competitions in Cremona and Osaka. Having studied in Germany with the Alban Berg Quartet, the quartet moved back to Australia in 2006 when they were appointed to the Australian String Quartet. For 6 years she toured, recorded and participated in chamber music festivals and enjoyed performing that wonderful repertoire all over the globe.

Since 2012 Sophie has travelled the world playing in principal violin positions with orchestras including the Scottish & Mahler Chamber Orchestras and the Vancouver, Sydney & Tasmanian Symphony Orchestras, as well as participating in many chamber music festivals in Australia. 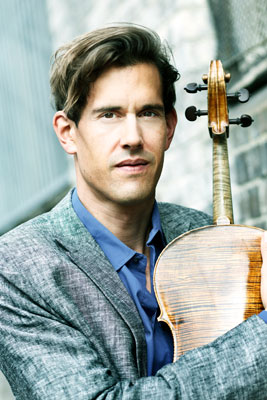 Tobias Breider is principal viola at Sydney Symphony Orchestra.  Tobias was born in Münster and began his music studies with violin and piano. He studied viola with Rainer Moog in Cologne, completing his Master’s degree, and a German Academic Exchange Service (DAAD) scholarship enabled him to study in New York with Michael Tree of the Guarneri Quartet. His intensive study of chamber music has also included lessons with the Alban Berg Quartet, Juilliard String Quartet, Sarah Nelsova and Miriam Fried.

Before moving to Australia to join the Sydney Symphony Orchestra in 2011, he held principal positions at the Rhine Opera Düsseldorf, the Konzerthaus Berlin and with the Hamburg Philharmonic State Orchestra under Simone Young. He has also appeared as guest principal with the Leipzig Gewandhaus Orchestra, the Berlin, Vienna and Cologne radio symphony orchestras, the Qatar Philharmonic and the Melbourne Symphony Orchestra.

As a soloist he has performed at the Sydney Opera House, the Domain and City Recital Hall, as well as the Melbourne Recital Centre. He regularly tours Queensland giving recitals and is a member of Ensemble Q in Brisbane. He is in demand as a chamber musician, and has performed at numerous festivals in the USA, Germany, the UK and South Africa. 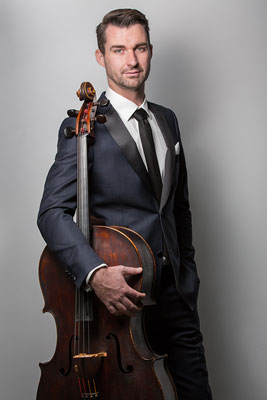 Chris Howlett is a cellist, festival director and producer.   He graduated in 2007 at the top of his class with First Class Honors at the University of Melbourne which included semester on scholarship in Vienna with Howard Penny.  Following graduation and launching his professional career he continued to take lessons in London with Richard Lester as part of the McKenna Fellowship and was part of the performance class at the Australian National Academy of Music.

As a cellist his focus is on chamber music performances with the trio as well as duo performances of the cello Sonata repertoire with close friends.  He performs regularly at a number of Australian festivals and has performed concertos around the world.  Chris has also performed concerti with both symphonic and chamber orchestras in Milan, Rome, Paris, Estonia and Melbourne. 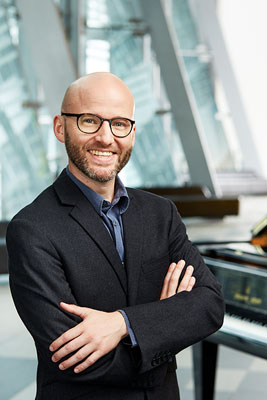 Daniel de Borah is widely recognised as one of Australia’s foremost musicians, consistently praised for the grace, finesse and imaginative intelligence of his performances.

Since his prize-winning appearances at the 2004 Sydney International Piano Competition, Daniel has given recitals on four continents and toured extensively throughout the United Kingdom and Australia. As a concerto soloist he has appeared with the English Chamber Orchestra, London Mozart Players, Royal Philharmonic Orchestra, Australian Chamber Orchestra and the Sydney, Melbourne, Adelaide and Auckland Symphony Orchestras.

Daniel studied at the Liszt Academy of Music in Budapest, the St. Petersburg State Conservatory and the Royal Academy of Music, London. He now lives in Brisbane where he serves on the faculty of the Queensland Conservatorium, Griffith University. 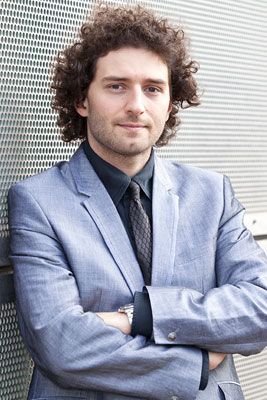 Melbourne pianist and composer Stefan Cassomenos is one of Australia’s most vibrant and versatile musicians.

He has been performing internationally since the age of 10, and is now established asone of Australia’s leading pianists.

As the recipient of multiple prizes including the Second Grand Prize in the prestigious International Telekom Beethoven Competition Bonn 2013, Cassomenos has performed throughout Europe and Asia, and now performs regularly in Australia, Germany and the UK.

He has performed concertos with several major Australian symphony orchestras, as well as orchestras overseas. 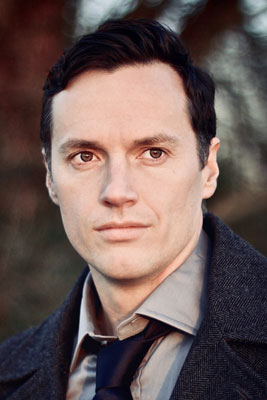 On the concert platform he has toured with the St Petersburg Philharmonic Orchestra with Maestro Temirkanov, performed with the Sydney, Melbourne, Queensland and Adelaide Symphony Orchestras, Moscow Chamber Orchestra, Sydney Philharmonia Choirs and has given recitals with pianist Daniel de Borah at the Wigmore Hall, and at the Oxford Lieder, Port Fairy, Huntington, Coriole and Canberra International Music Festivals. 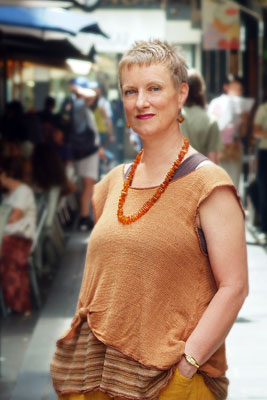 A performer of great versatility, the distinguished soprano Merlyn Quaife has performed opera, oratorio, lieder, chamber music and contemporary music to great acclaim throughout Australia and Europe. She has performed as soloist with the Singapore Symphony, Hong Kong Philharmonic and the Voronesz Philharmonic (Russia). Merlyn has appeared with every Australian Opera Company in roles ranging from the bel canto Lucia in Lucia di Lammermoor to the minimalist Chiang Ch’ing in Nixon in China. She has performed with all the major Australian symphony orchestras, featured in repertoire of every conceivable style from Handel to Ligeti, as well as recording a number of CDs including Aria for John Edward Eyre by David Lumsdaine, which won her a Sounds Australia Award. Her recordings appear on the Naxos, Move, Tall Poppies and ABC Classics labels.   In June 2013, Merlyn was appointed a Member (AM) in the General Division of the Order of Australia for her significant services to music.

In 1994, Merlyn made her American debut at the Kennedy Center in Washington DC, singing the title role in Gordon Kerry’s opera Medea with Chamber Made Opera. She also sang to great acclaim when she created the title role in Melbourne, with subsequent seasons in Sydney and Canberra with the same company. This was closely followed by a new production with the Berliner Kammeroper, which enjoyed three seasons. 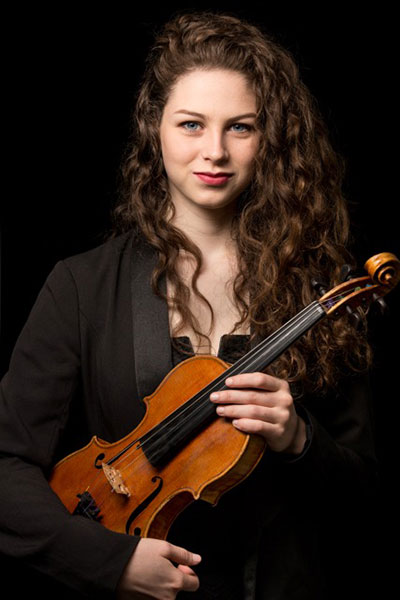 A household name in Australia, 21 year-old Lily Higson-Spence has become a highly sought after violinist in her native country as well as abroad. At the age of just 17, she was a grand finalist in the 2015 ABC Symphony Australia’s Young Performers Awards, winning the audience choice award, the prize for best recital, as well as the Nelly Apt Scholarship. In other competitions, Lily has simultaneously been awarded top prizes alongside numerous audience choice awards.

Following these successes, Lily was invited by Dr. Robin Wilson to commence studies at the Australian National Academy of Music, where she remained for three years. During this time, highlights included performances with Richard Tognetti, Anthony Marwood and Pekka Kuusisto, among others. In 2018, she left ANAM in order to pursue opportunities for further development as an artist in Europe.

Since leaving Australia in early 2018, Lily spent over a year studying in Berlin at the prestigious Hanns Eisler School for Music, and in October 2019, accepted an offer to receive further tuition in Salzburg at the Universität Mozarteum with Professor Rainer Schmidt, violinist of the renowned Hagen Quartet.